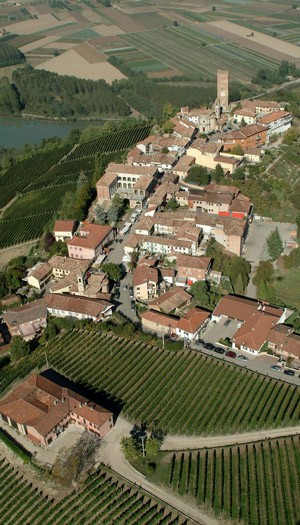 Perched atop a steep hill in the Langhe sits the small village of Barbaresco, home of the GAJA winery. The story of the GAJA Winery can be traced to a singular, founding purpose: to produce original wines with a sense of place which reflects the tradition and culture of those who made it. This philosophy has inspired five generations of impeccable winemaking. It started over 150 years ago when Giovanni Gaja opened a small restaurant in Barbaresco, making wine to complement the food he served. In 1859, he founded the Gaja Winery, producing some of the first wine from Piedmont to be bottled and sold outside the region. Since that time, the winery has been shaped by each generation’s hand, notably that of Clotilde Rey, Angelo Gaja’s grandmother. Her passion for uncompromising quality influenced and informed Angelo Gaja. Through Angelo, these values have become the cornerstone of the GAJA philosophy and are engrained in every aspect of wine production.

In 1961, Angelo Gaja began his mission of bringing this great winery to an even higher level. He was the first to use barriques, 225-liter French oak barrels. Under his direction, GAJA pioneered the production of single-vineyard designated wines and was the first to plant Cabernet Sauvignon, Chardonnay, and Sauvignon Blanc varietals in Piedmont. He was also instrumental in elevating the native Nebbiolo grape to world-class esteem.

Angelo Gaja is joined by the fifth generation of the GAJA family – his daughters Gaia and Rossana and his son Giovanni. Together they continue to advance the winery’s legacy. To fully realize their vision, all GAJA wines are produced exclusively from grapes grown in estate-owned vineyards, including 250 acres in Piedmont’s Barbaresco and Barolo districts as well as estates in Pieve Santa Restituta (Montalcino) and Ca’Marcanda (Bolgheri). It is from these storied vineyards, and their terroir – the combination of soil, weather, and vines that grow upon them, that GAJA wines reveal their true heart and soul.

Situated in the northwest, Piedmont shares borders with France and Switzerland. The region’s Italian name, Piemonte, translates to foot of the mountains, which is a fitting descriptor for its subalpine location and the fact that it’s surrounded by mountains on three sides—the Alps in the north and west and the Apennines in the south.

There are two distinct winemaking areas in Piedmont. One is northeast of Turin in an area near Lake Maggiore. The other, which is the region’s real heartland, is located southeast of the city in the provinces of Asti, Alessandria, and Cuneo. The highest concentration of vineyards altogether is in the Langhe and the Monferrato hills. This is where the region’s most acclaimed vineyard sites can be found. The land here is strikingly dense with vines. The surface area of some villages, particularly around Barbaresco, is almost entirely planted with curving rows of grapevines.

As a wine region, Piedmont has had enormous success cultivating its own indigenous varieties. Though some international grapes like Pinot Noir, Chardonnay, and Sauvignon Blanc are planted here, the region is renowned for its red wines made from grapes like Nebbiolo, Barbera, and Dolcetto and whites made from Cortese, Arneis, and Moscato.

The area is known for the morning mists and thick fog that roll through the mountains and valleys. It’s commonly believed that the Nebbiolo grape takes its name from la nebbia, the Italian word for fog.

Made from Nebbiolo, the two best wines of the region take their names from the local villages of Barolo and Barbaresco.

The mountains create a protective barrier around Piedmont and the sub-alpine foothills offer many sunny slopes for planting the region’s most-prized grape. While the sunniest aspects tend to be reserved for Nebbiolo, nearly all of the vineyards in Piedmont are planted on hills ranging in elevation from 150 to 450 meters above sea level.

Overall, Piedmont has a classically continental climate (though the area of Gavi in the southeast experiences some maritime influences from the Mediterranean Sea). The continental climate brings long, hot summers that extend into early autumn. Then temperatures drop quickly for a cool fall and cold winter. Spring is also cool and often rainy.

A romantic medieval Tuscan town, Montalcino is surrounded by hills and dense woods located about 80 km south of Florence. The soil, altitude and lush topography make Montalcino the ideal home for the Sangiovese grape and the celebrated wine of the area, Brunello di Montalcino.

Although geographically and culturally similar to Chianti, Montalcino has sandier soils and more limestone than those further north. In the northernmost reaches of the DOCG, soils are more calcareous and enjoy a cooler microclimate. Throughout the region, vineyards are planted at 300 to 500 meters elevation; due to the steep terraces here, much of the harvesting is done manually.

The first recordings of red wines from Montalcino date back to the early 14th Century. However, the all-Sangiovese Brunello di Montalcino style we know today did not emerge until the 1870s, just after the creation of a single Italian state.

Brunello, a diminutive of Bruno (“brown”), is the name that was given locally to what was believed to be an individual grape variety grown in Montalcino. In 1879 the Province of Siena’s Amphelographic Commission determined, after a few years of controlled experiments, that Sangiovese and Brunello were the same grape variety.In Montalcino the name Brunello evolved into the designation of the wine produced with 100% Sangiovese.

Bolgheri is a relatively young yet prestigious Italian appellation located in the Maremma on the Tuscan coast just to the south of Livorno, and named after a town in the north of the region. It is known mainly for deeply coloured, supple yet ageworthy red wines, usually based on the Bordeaux grape varieties. The winemaking zone features sloping coastal vineyards close to the Tyrrhenian Sea.

As recently as the 1970s, the area had little reputation for wine production, regarded elsewhere in Tuscany as something of a swampy zone producing fairly nondescript white wines and rosés, and better suited to other farming, in contrast to the prime Tuscan vineyards further up in the hills. Then, in 1978, in an infamous blind tasting arranged by Decanter Magazine, the 1972 vintage of a largely unknown wine called Sassicaia, made at Tenuta San Guido estate of the Marchese Mario Incisa della Rocchetta, beat a number of top Bordeaux wines.

Wine had been been made at Tenuta San Guido in a rather rustic fashion for personal consumption for some years previously, and only commercialized from the 1968 vintage, but this early example of a more polished version made by legendary winemaking consultant Giacomo Tachis led to an awakening of interest in the region.

Sassicaia’s name (“stony field”) alludes to the banks of gravel in the area, reminiscent of vineyards in the Graves and the Haut-Médoc, which inspired the French wine loving Marchese to plant Bordeaux varieties – particularly Cabernet Sauvignon and Cabernet Franc – rather than Sangiovese.

The sunny, dry and breezy climate of Bolgheri and the stony soils with clay patches have attracted further vineyard expansion mostly focusing on red Bordeaux varieties.

Until the current DOC regulations were laid down in 1994, Sassicaia and the other Super Tuscan wines produced here were usually sold as Vino da Tavola or Toscana IGT. Today a Bolgheri Rosso, Rosso Superiore or Rosé may be made entirely from Cabernet Sauvignon, Cabernet Franc, Merlot, or a blend combining one or more of these, and/or up to 50 percent of Syrah or Sangiovese. Other red grapes such as Petit Verdot may account for up to 30 percent.

The white wine grape most often used in Bolgheri Bianco is Vermentino, which may account for up to 70 percent of the wine. Sauvignon Blanc and Trebbiano Toscano may contribute up to 40 percent, and others no more than 30 percent. There are separate Bolgheri Sauvignon and Bolgheri Vermentino DOCs that must contain 85 percent of the headline grape variety. Many white wine examples are relatively light, crisp and refreshing, though there are some examples of barrel-matured whites.